Tornado Cough from Disasters is Preventable with MPE™

Have you ever heard of Tornado cough? 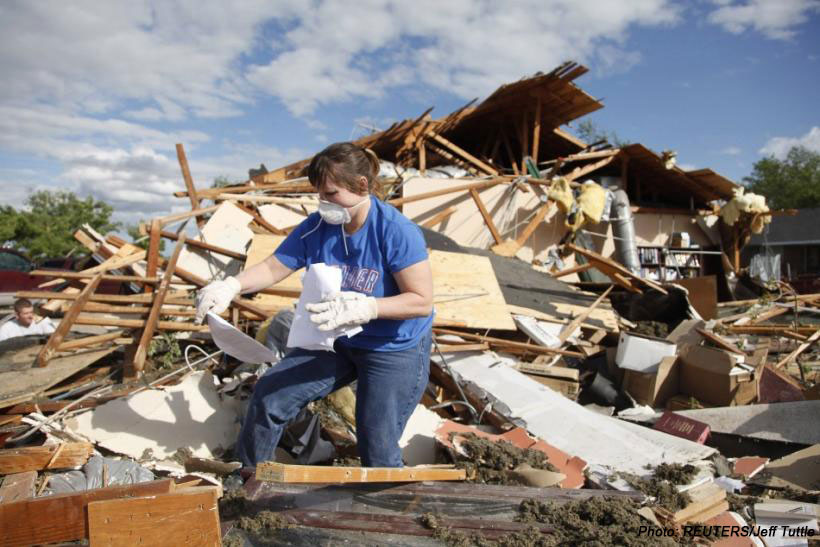 Exposure to disaster debris and their side effects are becoming so common that individual types and the health effects they cause are warranting their own names. Tornado cough is one of them. This is an adverse reaction to inhaled particles that irritates the lungs, resulting in coughing and can affect even the healthiest people.

Once the immediate danger from a disaster such as a tornado/twister has passed, it can leave behind an invisible danger that could be just as deadly as the initial threat. Typical things that were initially in buildings and safe to be around are turned into hazardous dust and debris, which can contain heavy metals (such as antimony, chromium, arsenic, cadmium, copper, lead and zinc), electronic waste from computers, monitors, batteries, and other toxic substances from, paints, PCBs (polychlorinated biphenyls) and asbestos.

This type of air pollution is especially harmful because very small particles floating in the air can be inhaled and enter deep within the lungs traveling to other organs. Although it can impact individuals differently, it can have an immediate and accumulative negative effect wherever it takes place and can be deadly in the long term. Research confirms that when absorbed, this deadly cocktail of small particles causes heightened rates of lung disease, cancer and other medical conditions.

Of course, tornado cough and other adverse medical conditions is not only the result from exposure to debris left from tornadoes, it can also come from other disasters such as wildfires, earthquakes, hurricanes, typhoons, tropical storms, rising rivers, tsunamis, bombings and terrorist attacks.

So what do you do after a disaster?

The immediate thing you can do to stop inhalation of particulate pollution from a disaster and the cleanup is to wear a dust mask or respirator.

The other important step is to contain and control the harmful debris to prevent it from becoming airborne and migrating to other places. Clearing property and sifting through debris can generate clouds of particulate pollution, especially on windy days, causing small particles to travel great distances on simple air currents. Preventing this can be simply accomplished by safely locking it down and containing it with GEI’s (GLOBAL Encasement, Inc.) MPE (Multi Purpose Encapsulant).

GEI's MPE is easily used and once applied immediately starts to control the debris. As the MPE cures it will continue to hold the offending material in place helping prevent it from becoming airborne or attaching to clothes and other surfaces. This safe and simple proven method of locking down with MPE to stop the release of hazards into the environment helps prevent the danger and resulting effects, such as tornado cough.