7 years ago, on March 11, 2011, an earthquake struck northern Japan triggering a monstrous tsunami. That powerful wave smashed into the Fukushima Daiichi Nuclear Power Plant causing a meltdown and massive release of radioactivity. The radioactive release added to all the contamination that was left behind after the destructive floodwaters receded and further complicated the cleanup.

I’ve handled and discussed many situations where toxic hazardous debris is left over from a disaster. This was by far the biggest and worst combination of toxic, hazardous material that I ever encountered. Literally mountains of it.

I happened to be in Japan when that disaster struck, although far south and safe from any direct effects. After the initial shock, I flew to Manila. Just after I arrived, I received a phone call saying my expertise was needed back in Japan. It was requested that I immediately return to make recommendations on how to lock down and contain the debris that was generated, much of which was hazardous. I knew that the initial containment of the debris was just the first step. Another thing they needed to consider were the options on the overall cleanup.

So I assembled a team of specialists - all experts in their field. I contacted the three persons with the skill set needed and I trusted most. Each of them immediately and unselfishly dropped what they were doing and made plans to board flights to Tokyo. I had to admit, they all showed incredible moxie and a charitable spirit. When most were evacuating and trying to get as far away as possible, these guys were willing to go in, share their expertise and assist any way they could.

Once in Tokyo, we climbed into a van for the two and a half hour drive north up the coast to Fukushima, just outside the evacuation/disaster zone. I decided the best way to illustrate my plan of attack on containing the debris was to do an actual onsite demonstration with our green coatings showing how quickly and safely all the rubble could be locked down and contained until and during the cleanup. We met with the Japanese Government and TEPCO’s (Tokyo Electric Power Company) upper management and discussed my plan of action to contain the debris until it could be removed and disposed. 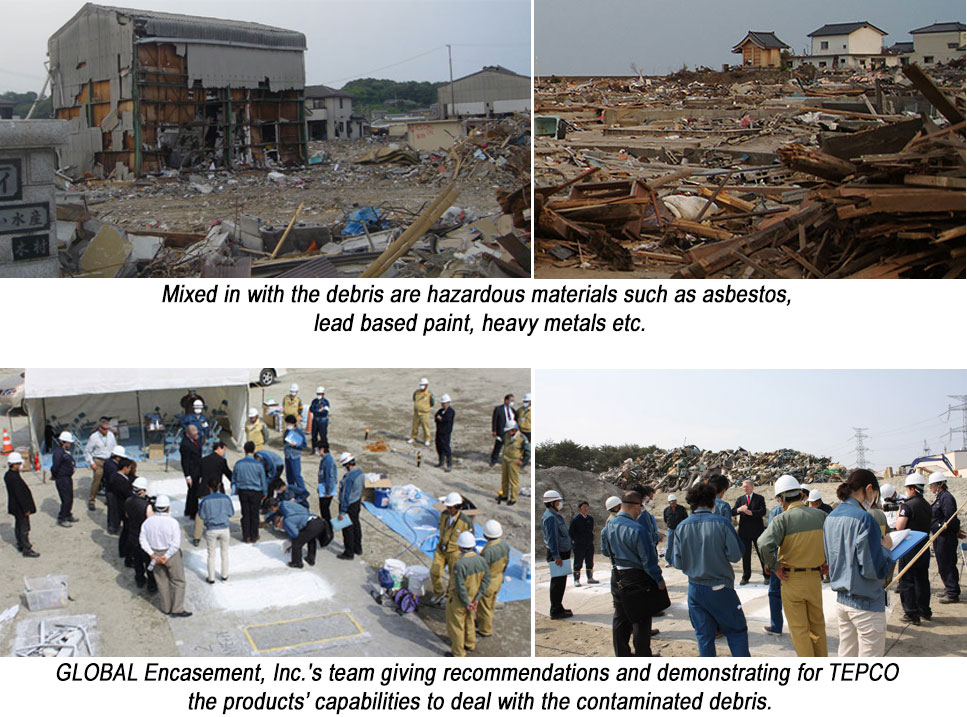 We proceeded to demonstrate GEI’s (GLOBAL Encasement, Inc.) coatings being applied in different combinations and thicknesses over the debris and soil to judge what would work best keeping in mind that both the soil and debris would eventually be removed and transported to different locations for disposal. During this real world demonstration, there were plenty of questions raised. Although all my answers satisfied the concerns, the actual application of the coatings onto the debris and witnessing first hand how effective this method worked was the best answer to all concerns. After the convincing demonstration was completed, two container loads of GEI green coatings  - almost 7,000 gallons was shipped in. The first was air freighted for expediency, while the other shipped by sea.

Next week, I’ll discuss the concerns around the choice of green coatings and how they were addressed. 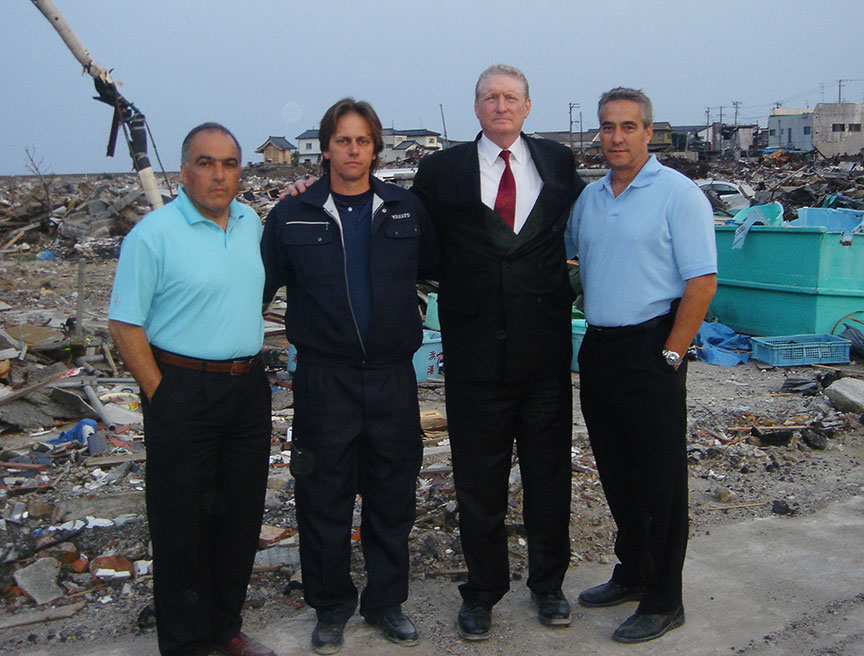 The team standing in the Tsunami aftermath with the realization of the heartbreaking situation reflecting on our faces.